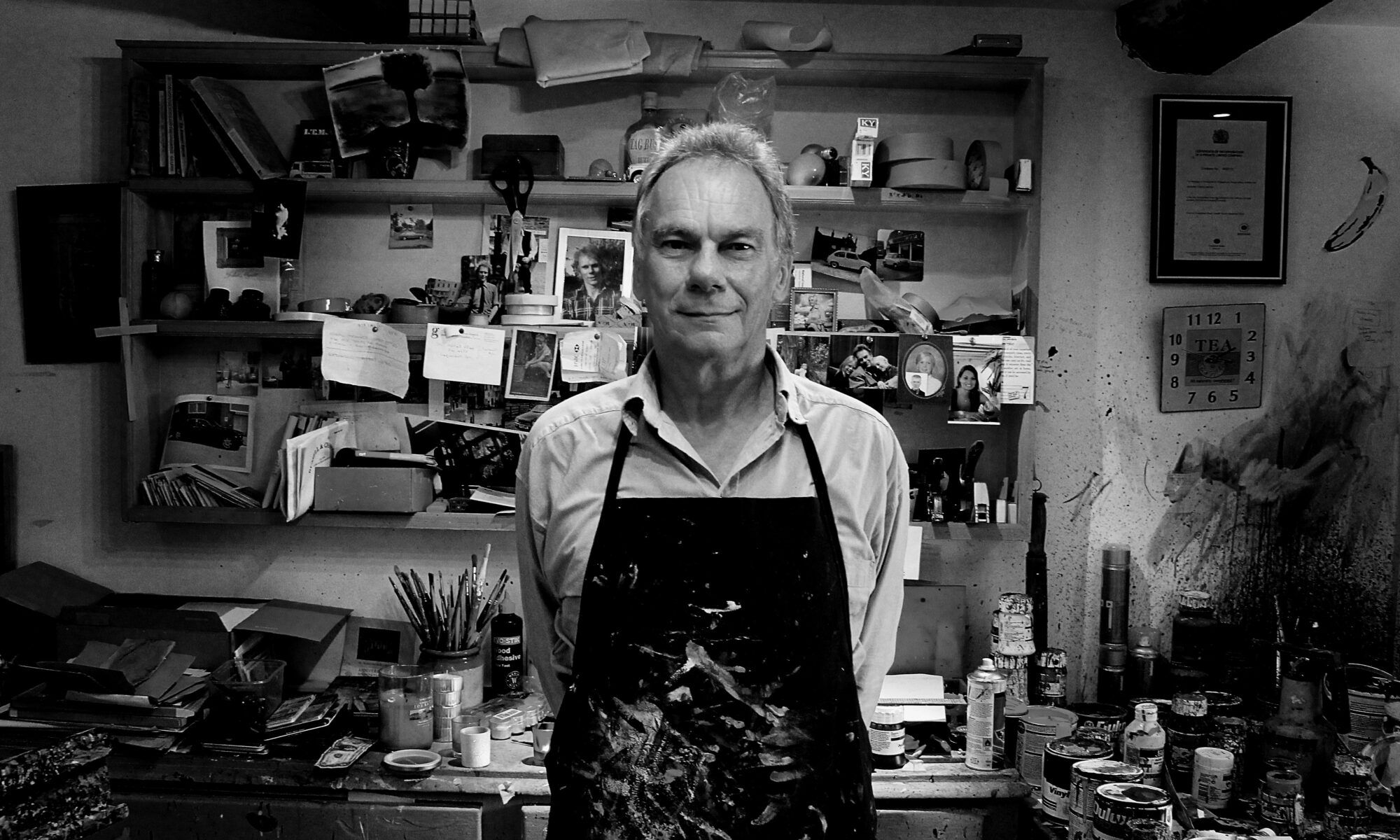 by Mark Honigsbaum, in The Guardian

John Myatt was responsible for the biggest art con of the 20th century, and ended up going to jail for it. Now his story is being turned into a Hollywood movie – and a prestigious gallery is showing his ‘genuine fakes’.

John Myatt is showing me some of his recent creations. “That’s a Giacometti,” he says, pointing to an abstract in swirling whites and grays entitled Apples on a Stool, 1949. “I’m not sure it’s quite finished yet.” Next, Myatt walks me to another wall of The Air Gallery, in London’s Mayfair, hung with a Modigliani, several Picassos and, in the centre, a large Ben Nicholson. “Now, this is actually a painting that failed,” he says. “In the end I had to paint over it with primer and sand it back to the canvas.”

For a painter who is celebrating his first London opening, Myatt is disarmingly honest about both his working methods and his failings as an artist. But then, this is not the first time that Myatt’s versions of works by Giacometti and Nicholson have found their way into the West End.

Between 1986 and 1994, Myatt churned out more than 200 new works by surrealists, cubists and impressionists, passing them off as originals with the help of an accomplice, John Drewe, an expert at generating false provenances. Despite the fact that many of Myatt’s paintings were laughably amateurish (they were executed in emulsion, not oil), they fooled the experts and were auctioned for hundreds of thousands of pounds by Christie’s and Sotheby’s. It was, said Scotland Yard’s art and antiques squad when they finally caught up with Myatt in 1995, bursting into his Staffordshire studio at the crack of dawn, “the biggest art fraud of the 20th century”. Indeed, to this day, some 120 “Myatts” are still said to be in circulation.

Now, having served his time – Myatt was sentenced to 12 months in prison in 1999 but was released for good behaviour after four months – and with Michael Douglas poised to turn his exploits into a feature film (working title, Art Con), he feels he has nothing to apologise for.

“If someone came to me with one of my fakes now I wouldn’t let on,” says Myatt, who is 60. “I figure that the paintings aren’t doing any harm. Besides, I’d be losing a perfectly innocent person money.”

Instead, he is seeking to forge a new career, so to speak, as a purveyor of what he calls “genuine fakes”. These are works by the very same artists he used to imitate when he was a criminal – not only Giacomettis and Nicholsons but Monets, Matisses and Renoirs. They even come with the artist’s signature. The only difference is that on the back of the canvas is a computer chip and the legend “Genuine fake” written in indelible ink.

In an age when a broken-down hut can win the Turner prize and Damien Hirst can make millions flogging “spot” paintings produced by teams of assistants, Myatt is hoping that his venture will be seen as a refreshing take on the question of what constitutes art. “So many things today are invented,” he says. “I think genuine fakes slot into that rather nicely. With a fake painting, you’re free to ask, does it go with the curtains? You can’t do that with a genuine Van Gogh because it’s worth millions.”

Myatt didn’t set out to by a faker. As a young art student he had high hopes of establishing his own artistic style. But whenever he turned his hand to landscapes or portraiture, he says the result was invariably “academic” and “dull”. Instead, he taught evening classes and began selling the odd fake to friends and colleagues. In 1983, he placed an ad in Private Eye that read: “Genuine fakes, 19th- and 20th-century paintings from £150.” The ad ran four times before he received a call from Drewe. “He had a mohair coat, wore expensive hand-made shoes and drove a Bristol motor car,” says Myatt. “He told me he was a professor of physics. I believed him.”

Drewe began by commissioning a Matisse, followed by several Dutch-style portraits. Soon Myatt was visiting him at his home in Golders Green and was on first-name terms with his wife.

The turning point came with the ninth commission. Drewe had run out of ideas, so Myatt suggested a painting by the German cubist Albert Gleizes. “It was based on a drawing I’d seen in a book. I called it Portrait of an Army Doctor. At first, John hung it on his stairway like all the others. It was only later that I think he got the idea to take it to Christie’s.”

The first thing Myatt knew about it was when he got a call from Drewe saying the auction house had offered him £25,000 and “how do you fancy £12,500 in a brown envelope?”. “It did not take me any time at all to make the wrong decision,” says Myatt. “It was as much money as I earned as a teacher in a year.”

Although Myatt had recently separated from his wife and was having to bring up their young son and daughter alone, he does not wish to make excuses. The truth, he says, is that he also enjoyed it. He began by knocking off fake Giacomettis, driving to Liverpool to catch an exhibition of the Swiss surrealist’s work, then rushing back to Staffordshire to make the first brush stroke.

“I try to get the artist’s work to hypnotise me,” says Myatt, who compares himself to an art-world Rory Bremner. “I also surround myself with lots of books. I like to know everything – where he was, what he was doing, what his relationship was like with his wife – when he was painting.”

In retrospect, Myatt says it is incredible that any of his paintings fooled the experts (it was only by chance, for instance, that he used the same cotton duck canvas favoured by Giacometti). Gradually, however, Myatt learned to use the correct materials and water down his emulsion with KY jelly to give it an authentic-looking glaze. Meanwhile, Drewe devoted his energies to generating fake provenances, collecting old gallery receipts from places such as the Institute of Contemporary Arts and slipping new entries into the card indexes at the Tate and V&A.

The scam eventually unravelled in 1995 when Drewe’s wife went to the police (they were going through a bitter separation) and Scotland Yard raided Myatt’s house. At first he denied everything, but when the officers discovered an unposted letter to Drewe in his briefcase saying that he wanted out, Myatt realised that the game was up. “The letter more or less amounted to a signed confession. The police were very nice about it. We ended up sitting round the kitchen table discussing art.”

Myatt survived Brixton prison by doing portraits of his fellow inmates in exchange for phone cards, earning himself the soubriquet “Picasso”. But when he was released, he says, the last thing he wanted to do was pick up a paint brush. Then he got a phone call from the officer who had arrested him, asking for a portrait of his family. This was followed by a commission of a Giacometti from a member of the prosecution team at his trial and a version of Dufy’s Casino at Nice for the Bar Council. Another convert is the TV presenter Anne Robinson, whom Myatt got to know while painting her portrait for a BBC2 documentary, Art Crime.

By 2002 Myatt was back to painting fakes in earnest – the difference being that he now found he could sell them under his own name for substantial sums of money (genuine Myatt fakes go for anywhere from £850 to £4,700). But while his prominent disclaimers are designed to keep him out of jail, he says he cannot vouch for what others in the art world may do.

“I went to a fraud conference in the summer and met a lady from the Giacometti foundation,” he says. “She said it’s no good putting ‘Genuine fake’ on the back; all they’ll do is re-line the canvas.

“As long as you’re selling in good faith, I’m told that you’re not committing a crime. What happens to the paintings in 70 or 80 years’ time is out of my control”.